Response to the EHRC 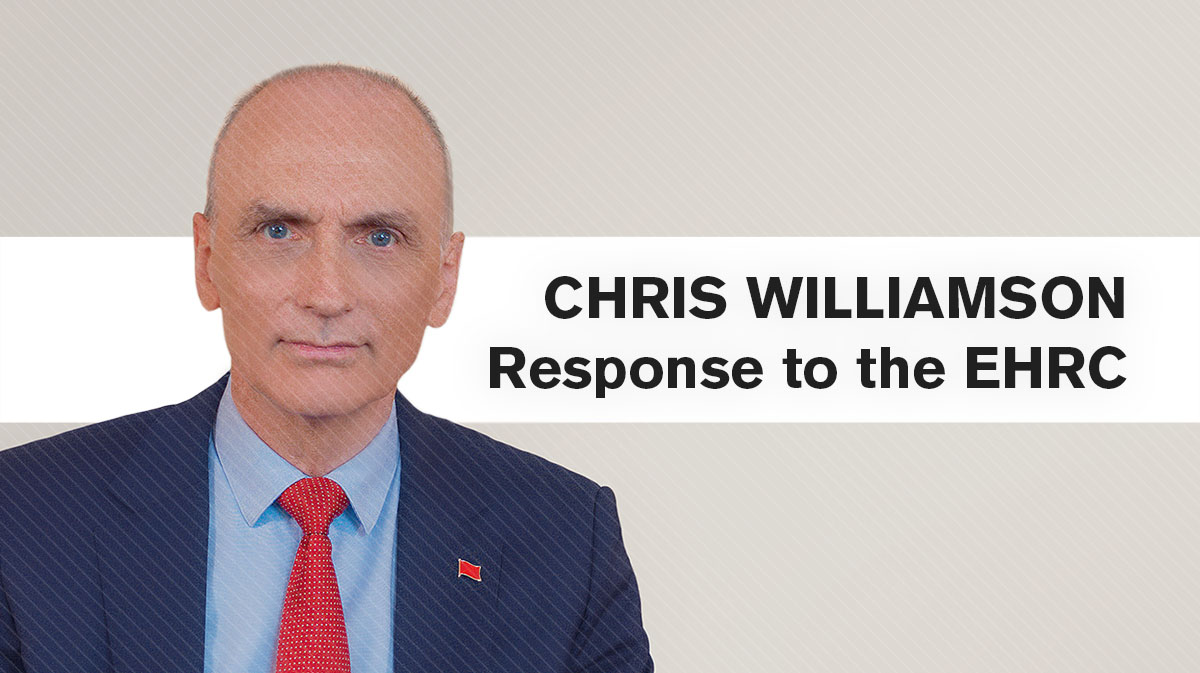 Last year, the so-called Equality and Human Rights Commission (EHRC) announced it was investigating the Labour Party’s handling of ‘antisemitism’, and they subsequently decided to name me in their draft report.

Today, I am pleased to say that, despite an intense campaign of vilification against me, the EHRC has determined that I did not contribute towards ‘unlawful harassment related to Jewish ethnicity’ by the Labour Party. This is despite the fact that the Commission desperately attempted to cobble together such a finding, and initially included an assortment of risible and offensive comments about me.

Although the EHRC still includes some references to me, it is obvious that they have failed in their attempted witch-hunt, even though they had huge establishment backing. Thanks to the incredible support of our grassroots movement, I was able to assemble a top legal team, which exposed the draft report’s monumental flaws.

The revised report acknowledges that I ‘successfully challenged’ my unlawful re-suspension from the Labour Party in the High Court last year. The Commission was also compelled to find that the Party’s disciplinary process against me was ‘influenced by external events’ and subject to ‘political interference’.

This outcome is a vindication of my longstanding record of standing up to racism, which stretches all the way back to the 1970s when I joined the Anti-Nazi League. And as a young apprentice bricklayer, I regularly risked my own personal safety by confronting casual racism on building sites. Furthermore, under my leadership, Derby City Council became one of the first local authorities in the country to formally commemorate Holocaust Memorial Day. I am therefore pleased that my commitment to anti-racism could not be impugned, despite the EHRC’s efforts.

Nevertheless, the justification behind this report is a travesty, and it is essential to understand the function it serves.

The EHRC launched its investigation following ceaseless lobbying efforts by two anti-Corbyn and pro-Israel outfits, the Jewish Labour Movement (JLM) and the Campaign Against Antisemitism (CAA).

To many of us, the motivations were clear: this was an attempt by Zionists and other racists to weaponise ‘antisemitism’ in order to criminalise anti-Zionists and left-wing Jews. It also served another purpose, which was to help derail the Party’s pro-Palestinian leadership, after it had rocked the British establishment when it came tantalisingly close to winning office in 2017.

These cynical motivations were facilitated by the EHRC, which itself has been the subject of repeated controversy. The Commission has allegedly discriminated against its Black, Muslim, and disabled staff, and many of its Commissioners have links to the Conservative Party (as well as being affected by seemingly endless other conflicts of interest).

I had, therefore, anticipated the EHRC would include me in their investigation. After all, I had been a wholehearted supporter of Jeremy Corbyn’s leadership, and had already been subjected to a vociferous smear campaign by the Conservatives, the Israel lobby, and opponents of greater democracy in the Labour Party.

My opposition to the anti-Palestinian IHRA ‘working definition of antisemitism’ – and my support for anti-Zionists and left-wing Jews who had been hounded out of the Party – had brought down an avalanche of smears on me.

This smear campaign was not merely an attempt to damage my reputation and unseat me from office, it was also designed to make an example out of me to anti-Zionists everywhere.

This Zionist strategy, which takes a maximalist and belligerent approach in its defence of the State of Israel, has largely worked. Many people have been paralysed by the fear of being labelled an ‘antisemite’, and deterred from speaking up for Palestinians or even voicing the most basic truths about the ‘antisemitism crisis’. It is important to understand the Commission’s investigation in the context of this wider Zionist strategy which, in this instance, saw an arm of the state – the EHRC – being co-opted to serve their perverse aims.

The EHRC’s report is an astonishing document, and is flawed in several ways. Firstly, it fails to even consider the approach and motivations of the CAA as a complainant, and the resultant impact on the credibility of the material submitted on its behalf.

The CAA has not been shy about making its political motivations clear, and their conduct has been suspect to say the least. In 2018, the Charity Commission required the CAA to amend a petition calling for Jeremy Corbyn to resign. They responded to this by amending the petition title to ‘Jeremy Corbyn is an antisemite and is unfit to hold any public office’.

The Charity Commission is also investigating the CAA about its campaigning during the 2019 general election and comments made afterwards.

Joe Glasman, Head of Political and Government Investigations at the CAA, posted a bewilderingly explicit video message after the 2019 general election. He offered his personal thanks to ‘every single person out there who actively resisted the antisemitism of Corbyn and the Labour Party and say well done – mazel tov – [...] the beast is slain’. He also described Corbyn as being ‘slaughtered’.

Moreover, the CAA may have committed data protection breaches through its evidence-gathering measures, but all these facts appear to have been disregarded by the Commission.

Throughout the report, the EHRC has drawn conclusions on what is and is not ‘antisemitic’, in circumstances where it has no legal power to do so. In addition, the Commission fails to give a definition of ‘antisemitism’ in the report itself, and seems to proceed from the assumption that anything it considers to be antisemitism is antisemitism. This attempt by the Commission to go beyond its own statutory powers illustrates the McCarthyite nature of the report, which has seemingly twisted established legal norms in order to reach predetermined conclusions.

The EHRC also omits one of the most crucial factors in how ‘antisemitism’ complaints have been dealt with in the Party: internal factionalism. The report speaks about ‘a failure of leadership’ but does not properly explore the systematic attacks levelled from within the Party against Jeremy Corbyn.

The leaked Labour report from earlier this year laid bare, for all to see, the extent of duplicity and scheming against the Corbyn leadership, including the weaponisation of ‘antisemitism’. Yet, the Commission does not factor this into its conclusions.

On top of this – despite cries about ‘institutional antisemitism’, a ‘crisis’, and a supposed ‘existential threat to British Jews’ – the EHRC bases its report on a miniscule sample of 70 complaint investigation files made over a three-year period.

The Commission’s unlawful act notice is based on tenuous examples of ‘indirect discrimination’, as well as the comments of a retired and elderly politician and another individual occupying a low-level role whose existence is probably unknown to most of the general public.

Whilst I imagine this report will in many ways be a disappointment to the Israel lobby, and anticlimactic for everyone else, it has ultimately served its purpose. It has played a vital role in delegitimising socialists in the Party, and will now function to encourage the permanent Zionist assault on all those who oppose them.

Now is the time to fight back.